This is a guest post by St. John Chrysostom on the subject of friendship. I hope you are as fortunate as me to have at least one person in your life who you are reminded of when you read this

For what would a genuine friend not do? What pleasure would he not create for us? What benefit? What safety? Though you were to name a thousand treasures, there is nothing comparable to a real friend. 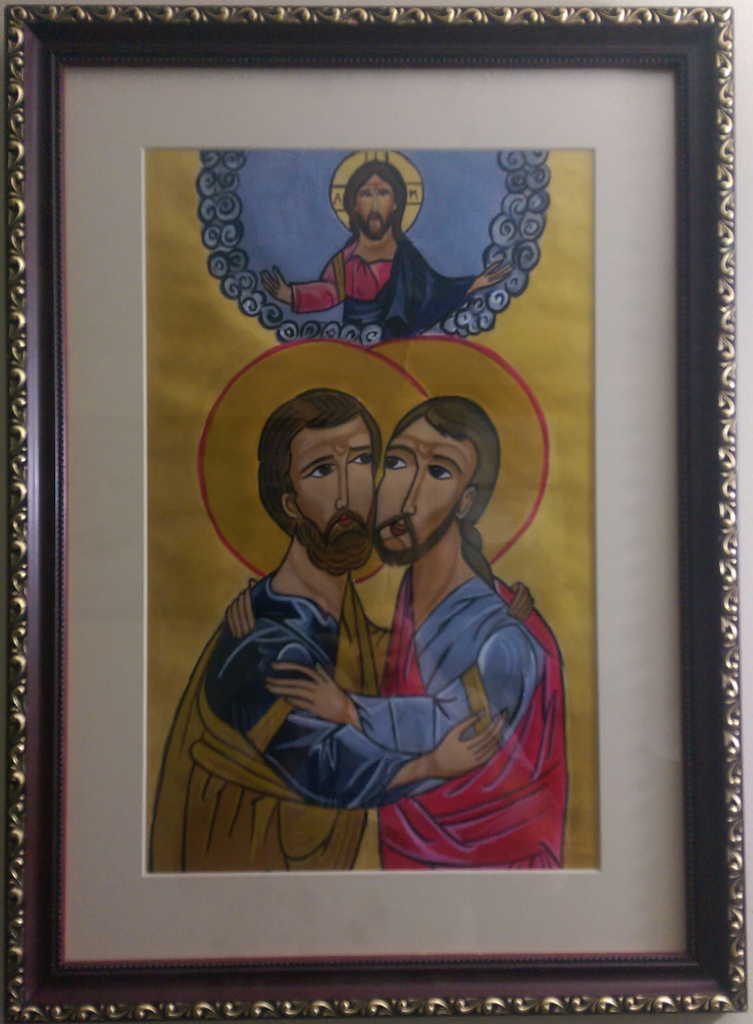 First let us say how much pleasure friendship brings. A friend is bright with joy, and overflows when he sees his friend. He is united to him in a union having a certain ineffable pleasure of the soul. If he merely thinks of him, he rises and is carried upwards in his mind. I speak of genuine friends, who are of one accord, of those who would choose to die for their friends, of those who love warmly. Do not imagine that you can refute what I say with the example of those who love lightly, or who are sharers of your table’, (Ecclesiastes 6:10), or with whom you have a nodding acquaintance. If any one has a friend such as I describe, he will understand my words; and, though he should see his friend every day, it is not often enough or him. He makes the same prayers for his friend as for himself. I now a certain man, who, when asking for the prayers of a holy man n behalf of his friend, asks him to pray first for the friend and then for himself.

It is not possible to express in language the pleasure which the presence of friends causes, but only those who have experienced it know. One can ask a favour, and receive a favour, from a friend without suspicion. When they make a request of us, we are grateful to them; but when they are slow to ask, then we are sad. We have nothing which is not theirs. Often, though despising all earthly things, nevertheless, on their account, we do not wish to depart from this life; and they are more desirable to us than the light. Yes, indeed, a friend is more desirable than the light itself. (I speak of the genuine friend.) And do not object; for it would be better for us for the sun to be extinguished than to be deprived of friends. It would be better to live in darkness than to be without friends. And how can I say this? Because many who see the sun are in darkness. But those who are rich in friends could never be in tribulation. I speak of the spiritual friends who set nothing above friendship.

Such was Paul, who would willingly have given his own soul, without having been asked, and would have willingly fallen into Hell for his brethren (Romans 9:3). With so burning an affection is it proper to love. Take this as an example of friendship. Friends surpass fathers and sons, that is, friends according to Christ.

To have a friend is to have another self; it is concord and harmony, which nothing can equal. In this, one is the equivalent of many. For if two, or ten, are united, none of them is merely one any longer, but each of them has the ability and value of ten; and you will find the one in the ten, and the ten in the one. If they have an enemy, attacking not one, but ten, he is defeated, for he is struck, not by one, but by ten . Has one fallen into want? Still he is not desolate; for he prospers in his greater part; that is to say in the nine, and the needy part is protected; that is, the smaller part by that which prospers. Each one of them has twenty hands, and twenty eyes, and as many feet. For he sees not with his own eyes alone, but with those of others; he walks not with his own feet, but with those of others; he works not with his own hands, but with those of others. He has ten souls, for he alone is not concerned about himself, but those other nine souls are concerned about him. And if they are a hundred, the same thing will take place again, power will be increased. See the excellence of godly love! How it causes one individual to be unconquerable and equal to many.

What about monks, then, one might ask, and those who live as hermits on tops of mountains? They are not without friends. They have fled from the tumult of the marketplace, but they have many of one accord with them, and are closely bound to each other in Christ. And it was in order that they might accomplish this that they withdrew. For, since the zeal of business leads to many disputes, they have left the world to cultivate godly love with great strictness.

The sceptic then might say: What? If a man is alone, may he also have friends? I, indeed, would wish, if it were possible, that we were all able to live together; but, in the meantime, let friendship remain unmoved. For it is not the place that makes the friend. Furthermore, the monks have many who admire them; but no one would admire unless they loved. Also, the monks pray for the entire world, which is the greatest evidence of friendship.

For the same reason we embrace each other in the Divine Liturgy; in order that being many, we may become one. And we make common prayer for the uninitiated, for the sick, for the fruits of the earth, and for travelers by land and by sea. Behold the strength of love in the prayers, in the holy mysteries, in the preaching. This is the cause of all good things. If we apply ourselves with due care to these precepts, we shall both administer present things well and obtain the Kingdom.

See our About Us section!

Why Are Most Of Your Friends Girls?
Spoken Word | We Belong To Each Other
The Blur Between Today and Yesterday
Nifuna, Nifuna, Nifuna
The Holy City
Eternal Summer
The Pride of Intolerance
The Truth About Moving On
Vulnerability: For Love and Risks

Нello, just wantеd to mention, I liked this blog post.

It was practical. Keep on posting!