Today in our world gender seems to be changing. For many, this appears to be the norm in our changing society, where humans develop through their increasing knowledge of the human race. For others, they have a foundational truth and their meaning of gender is not shaken.

This post will show the idea that God designed gender because of the fall and that gender itself tells the story of redemption.

Please Note: We can only explore this concept with a Christian lens because the purpose is to tackle this issue within our Church. Outside the Church is a different perspective altogether.

The problem is that we have allowed the mystery of our faith to leave our local churches all the while replacing it with scholastic theology. Saying that gender is by design is not enough in this day and age. Why? Because humans are becoming the ones who are deciding what Truth is all the while neglecting the Person of Truth. Gender is our identity, it is a part of who we are, and it points to the fact that it is God who designs us. Gender tells the story of redemption, the story of restoration, the story of unity.

Gender is defined these days as a ‘social construct.’ The problem with this definition is that society dictates how we should be, rather than recognizing who we actually are. In other words, how we were designed to be by the One who made us.

“It’s okay for me to be me, whatever that is,” has become this generations motto for absolutely everything. 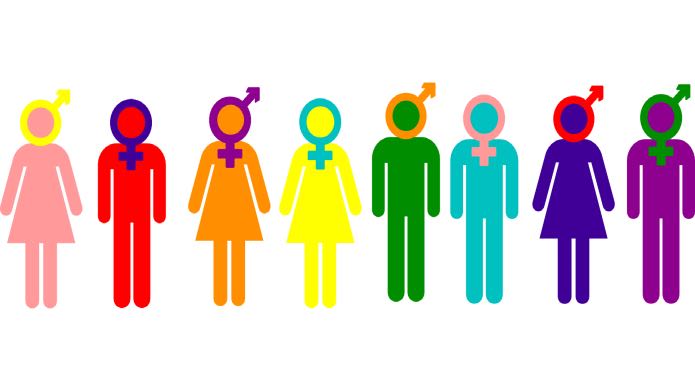 In order to define gender, we must look at the relationship between God and man, as therein lies the context for which we see the male-female relationship.

Fr. Thomas Hopko affirms that as humans, we are the revelation of the Trinity, we are made male and female in order to grasp and attain the divine life we were made for.

According to St. Gregory of Nyssa, the male-female distinction was made according to the foreknowledge of God, knowing that man would fall. It can be concluded from St. Gregory’s work that sexuality is not part of the image of God that was given to man in creation; rather sexuality has a salvific function. This function is oneness with God.

This illustrates that the image of God, as designed, does not include gender.

Archbishop Lazar Puhalo emphasizes the idea that sexuality was made for the fall of man, when he explains that the intention for gender was prophesy. Gender bears in itself a revelation of what man’s life is and his relationship to God.

Many times in the Old Testament, there is reference made that man’s relationship with God is of a marital relationship. He uses the example of Hosea and Gomer to illustrate His covenant between Himself and Israel. It is through Hosea that He reveals to Israel His desire to redeem and restore man. Ultimately, God is revealing to man the relationship between God and His Church.

God, from the inception of creation, placed the mystery of human gender as a revelation and prophecy. It is in this mystery that we find the core of our redemption in Christ, through our distinct male and female roles. Christ, our husband, is faithful to his wife, the Church, and continues to pursue her in order to redeem her. Marriage, in the context of male and female is the design in which God chose to redeem humanity. This was a belief from the early Church when Clement of Rome wrote: “God made the human person, male and female. The male is Christ, and the female is the Church.”

“Shall I tell you how marriage is also a mystery of the Church? Christ came into the Church, and She was made of Him and He united with Her in spiritual intercourse… So marriage is a type of the presence of Christ.
-St. John Chrysostom

God’s design was male and female. This was to echo and reveal the prophecy between Christ and His Church. The prophecy was the redemption of humanity, the Church, being joined with its Creator. The only reason for this design is the fall of man, being separated by sin from God.

In the resurrection, St. Paul teaches that there is no difference between male and female.This is the case because the prophecy has been fulfilled; Christ is united with His bride, the Church. Human gender, which had a prophetic role, has been fulfilled.

This perspective follows on, as we have discussed, the role of man and woman is to reveal the relationship between Christ and His Church. Therefore, once man has reached his heavenly destination, the role of male will cease as Christ the visible is present. The same is found with the role of women, which prophetically reveals the Church.

In terms of the Church, if man and woman are not fulfilling their roles then we are essentially perverting the Gospel and the revelation of who Christ is.

When we use terms that have not been given to us by God, or when we identify ourselves in ways God never revealed, then we are distorting the story of our salvation.

Let’s live out our vocation as one body, male and female, that we may see the Risen and Ascended Christ in our daily lives.

Hi my name is Veronia. I'm on some crazy adventure with my husband in South Korea. I love cheese and anything made from potatoes. I love tasting new flavours of food but also of life. Discovering new, unique and authentic ideas is one of my greatest passions. I'm a pilgrim in this life searching for abundance in every aspect of my life and the creative within me and around me. I am slowly becoming aware of how much we imprison ourselves on a daily basis, how we chain ourselves to people, places, feelings, expectations and dreams. In order to live out the abundant life that we are called for and to become alive, we must break free; break free from every negative habits that we have built, from cultural norms, from the mundane that stops us creating and makes us lose our wonder. To become fully alive is to be liberated from our festering wounds that paralyse us from living a life worth living. You and I are a work in progress; together, through hospitality and offering each other the free space we need for change we will unlock the mysteries of Life.

The Still Waters
The Conveying of Life
A New Season Has Begun
In His Image
Two Processions
A Game of Chess
The Church: Healing
The Church: Wounded
The Anatomy of Living