Why We Can’t Not Pray

Everywhere I go I’m constantly learning about prayer these days… The church I attend is currently doing a Series on Prayer, I’ve been asked to speak about The Lord’s Prayer, and I’ve also recently researched and presented my findings on Orthodox Prayer Life (based upon on the book by Matthew the Poor, which I highly recommend!)
What follows is a brief excerpt from the book mentioned above that really touched me, and brings me to my knees in prayer and worship every time I read it. 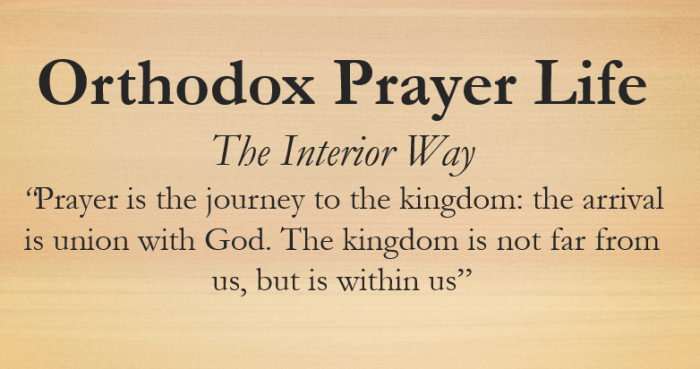 “Let him who does not pray expect nothing whatsoever from God- neither salvation nor renewal nor direction nor grace. Rather, he is consigned to the whims and fancy of his own mind, the will of his own ego, and the direction of his own thinking. He is like one who has rejected the intervention of the Lord Jesus in his life, like the one who hides himself from the Spirit of God. A man who wishes to remain as he is and not be changed, renewed or saved. His life unconsciously changes from bad to worse. He recedes spiritually day after day. The ties that bind him to the earth and the flesh increase without his awareness. His ego remains the source of all his desires and ambitions.

As for his relationship with Christ, it remains only superficial and outward. It has no power to change or amend anything. The possibility even to deny Christ at times of danger, temptation, illness, or poverty becomes imminent.
So if man does not pray, he can never be changed or renewed, and he who is not changed or renewed can have no genuine or effective relationship with Christ. His worship, however active, is nothing but an outward protrusion or a superficial growth. In the end it breaks off, bearing no fruit.”

Let these words move us to develop a habit of communing with the God who made us. He who desires for us to know Him intimately through time in His presence, is calling His sons to Himself. Let’s not keep Him waiting.

I am a technology entrepreneur who enjoys fiddling with gadgets, coming up with high-tech ways to automate everyday life, and building technical solutions for various businesses. I am on a journey to becoming fully alive by learning how to be a member of humanity and a partaker of the divine. It is my deep desire to inspire people who are just existing to live passionately and adventurously for a purpose beyond themselves. I am eager to point my reader to a compelling and life changing power that is theirs to claim if they want it. Just as a blind man tries to feel his way along a wall, so must we be continually attempting to grasp the deep meanings of life. "And so we have the prophetic word confirmed, which you do well to heed as a light that shines in a dark place, until the day dawns and the morning star rises in your hearts"